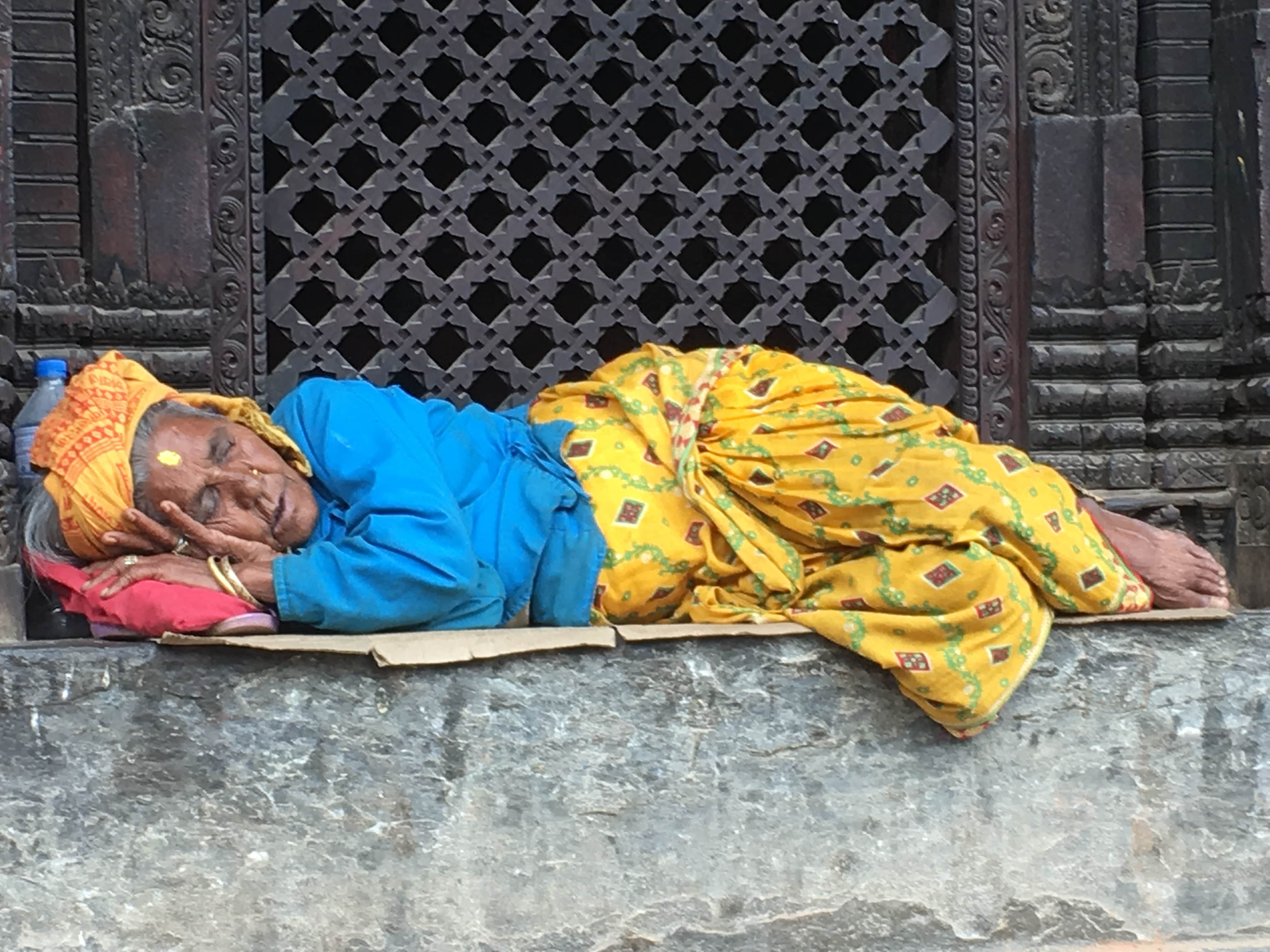 Day 9 - All Things Are Not Equal

What does it mean to be a marginalised person? We can easily find a definition “to put or keep (someone) in a powerless or unimportant position within a society or group”. But how does reading a definition actually give us insight as to what this really means for a human being? Spending time here in Nepal is highlighting for us how different people’s lives are when their society chooses to exclude certain groups from basic human rights of equality. The week has brought this message home – hard enough to smack us right in the middle of our hearts and feel it constrict with the injustice.

A true moment of realisation came to us when we looked closely at the handprints drawn by the twelve members at Seven Women. In each of their drawn fingers they had the opportunity to include what they value most in their life. One word seemed to keep appearing as a core value: it was freedom. It was my gut-wrenching realisation that this is what it means to be a marginalised woman: the absence of freedom. It struck me that I have taken for granted my status as an independent western woman who is free to choose safety and protection, happiness and health, and a certain measure of peace in my life. The life of a Nepali woman is so hard. Malnutrition and poverty hit women hardest. Women usually worked harder and longer than men. If a Nepali girl is not in school, she is three times more likely to be married under the age of 18, and she is twice as likely to die in childbirth than, if she completed primary school. 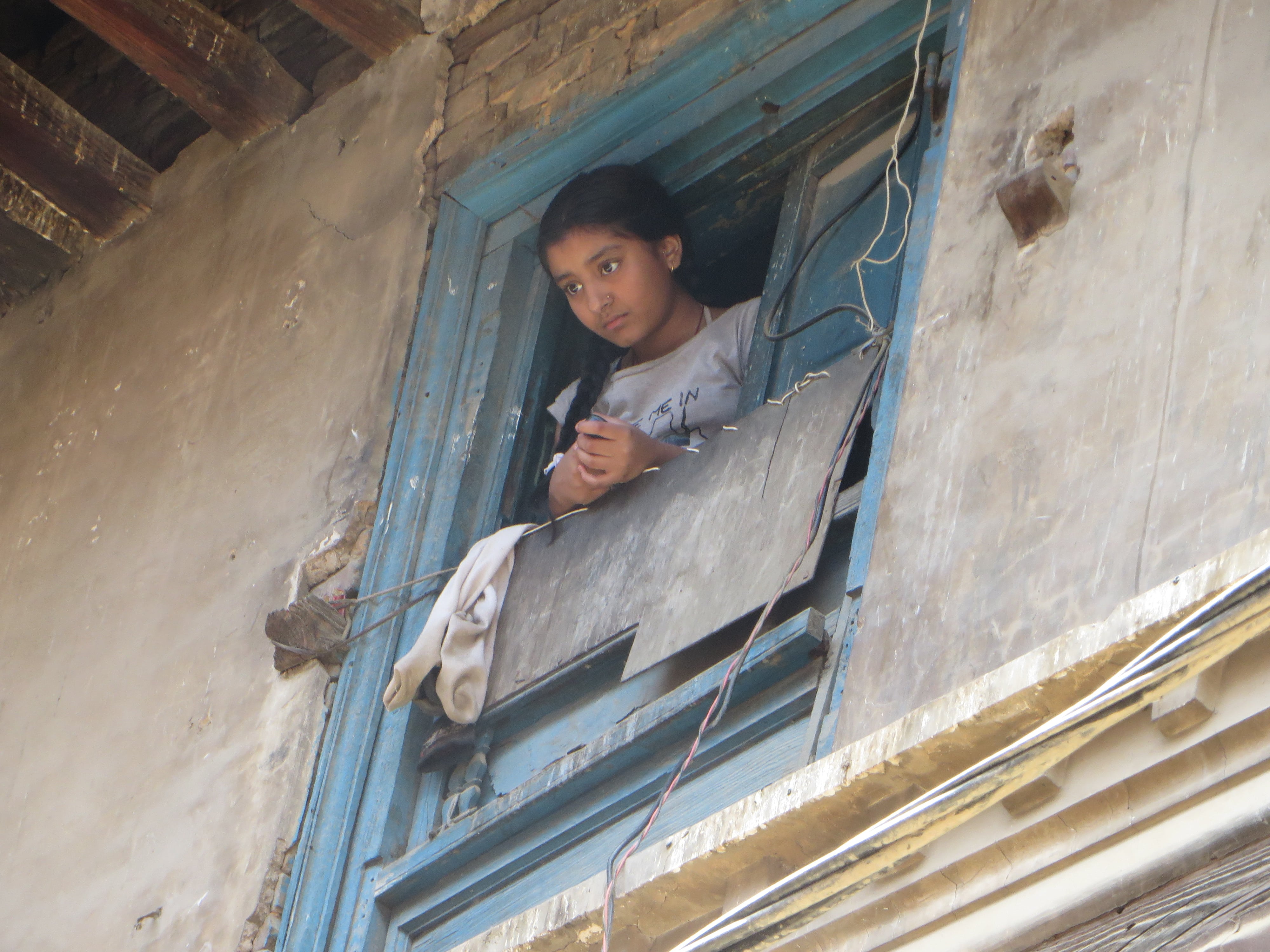 Child marriages lead to pregnancy and birth at young ages, which often result in health problems, such uterine prolapse. Women can die from complications during childbirth while attempting to reach the clinic from outlying villages. Their knowledge is poor about their health and they believe the spirits and the witchdoctors will save them if they become ill. Their lives remain centered on traditional roles —taking care of most household chores, fetching water and animal fodder, and doing farm work. Their standing in society is mostly contingent on their husbands' and parents' social and economic positions. They have limited access to markets, productive services, education, health care, and local government. Women frequently experience violence against them, and child labour is a product of their poverty and caste- system. Only 40% of girls are educated beyond primary level. When 10% more girls go to school, a country’s GDP increases an average of 3%. 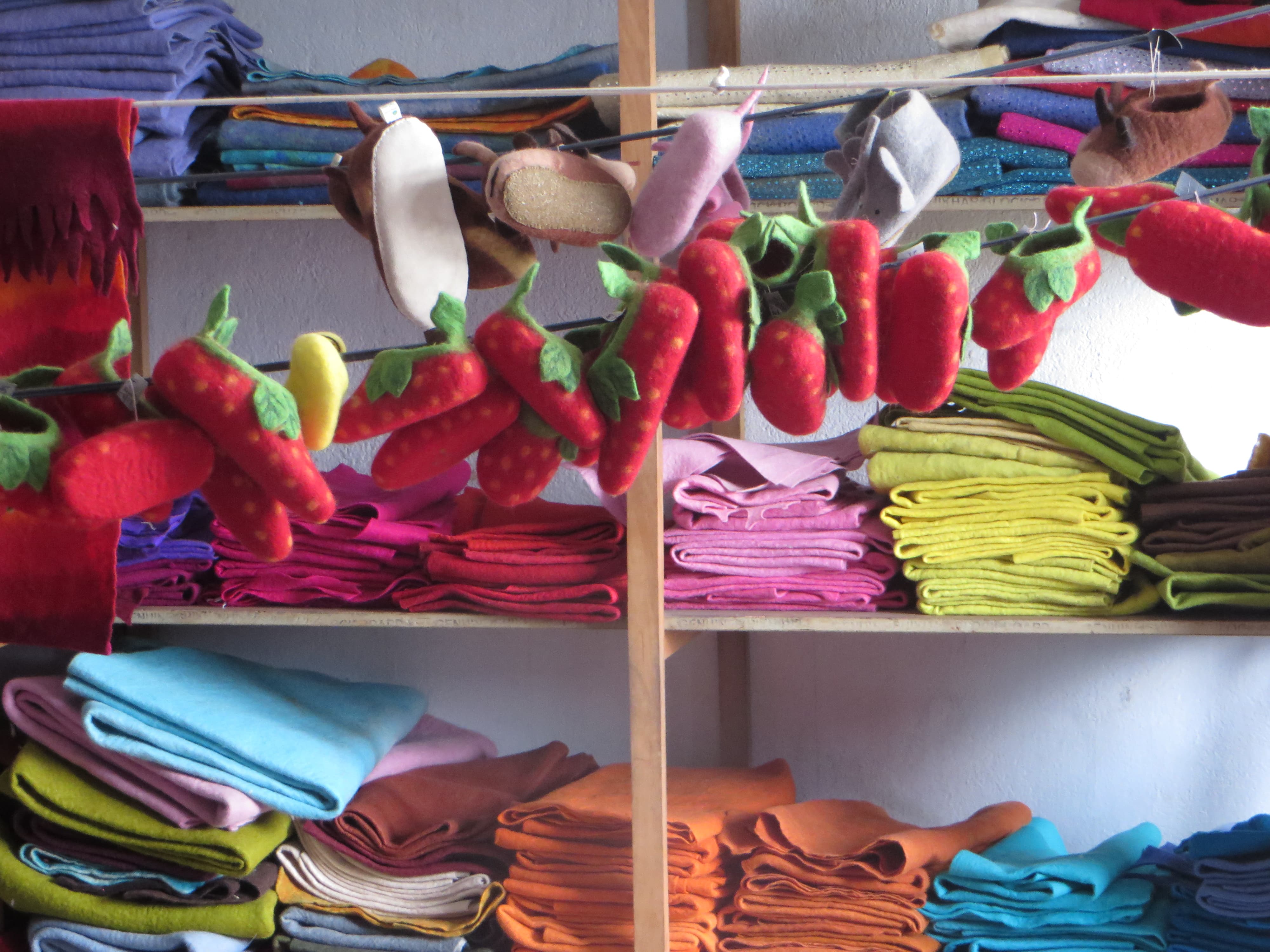 ​We have also encountered the Dalit population who are the “untouchables” of the Hindu caste-based system here. The Dalits make up 15% of the population and are discriminated for their lowest status in society. Whilst this discrimination is illegal, it frequently occurs with them being denied access to religious sites, resistance to inter-caste marriages, and refusal by non-Dalits to touch anything they have been in contact with. They have low life expectancy and high levels of poverty (usually living off less than USD$2 per day). Dalit women suffer double the discrimination due to their gender and their caste. There is very low literacy and an exceptionally low 11.8% enrolment of Dalit girls in secondary school. The Gandharba community are the lowest caste musicians who play the sarangi instrument, and sing and dance, and are ostracised for these skills. We were entertained last night by their fun loving street music in their social business restaurant, Sarangi, set up by an Australian to assist this community to become self-sufficient. However their original restaurant was damaged by the earthquake and are slowly recovering. Sadly most of the community come from villages who were in the earthquake epicentre and are still struggling for shelter, blankets, schools and education.

We’ve been so lucky to be involved with Seven Women who socially and economically empowers marginalised and disabled in Nepal through skills training and employment. It links closely to other organisastions who work with the same philosophy, such as Maiti Nepal for anti-sex trafficking) and Nag Nepal school . This school was started by a Swiss-Australian woman who has provided 23 years of residential schooling for up to 350 children of marginalised women. Her original children are now grown adults who also to manage the school and medical clinic.

The Association of Craft Producers (ACP) Fair trade started 30 years ago in a small two-room building, aiming to provide fair access to employment for marginalised women needing to improve their status. ACP recognised that women are often involved in the hobbies of traditional craft and felt these hidden skills could be explored for their own welfare. We spent a few hours wandering their five storied extensive building full of workshops of ceramics, screen printing, carpentry, glassware, knitting, felting and so much more. We saw laughing, happy women sitting at tables, workbenches and in clusters on the floor creating beautiful contemporary work that is well-designed with style and sustainability. Three decades later ACP are fully sustainable and employ 120 women producers and administrative workers, on site, under the fair-trade act. They outsource to 1000 women producers as home-based artisans in rural areas and provide fair wages that to women to make substantial contributions to their household income. We were impressed at the monthly wage, and the inclusion of sick pay, maternity leave, food allowances and more. ACP now has an annual turnover of USD $1.1 million! But more importantly these women have gained self-confidence, and increased respect from other family members, especially their husbands and in-laws.

I happened to mention my profession as a physiotherapist and my concern for the repetitive postures of workers whilst on site with the craft producers. They were very keen to improve the health and safety of their workers. So before I knew it I was offering to run a training session in postural exercises at work and mindfulness for stress relief. My afternoon session there today was delivered to 45 workers (via translation) who stretched and released their muscles and joints with exercises and refreshed their minds with meditation. There was lots of laughs, and nodding of appreciation for the education. They will proceed to train their 100’s of production workers in these in the next month with my material. 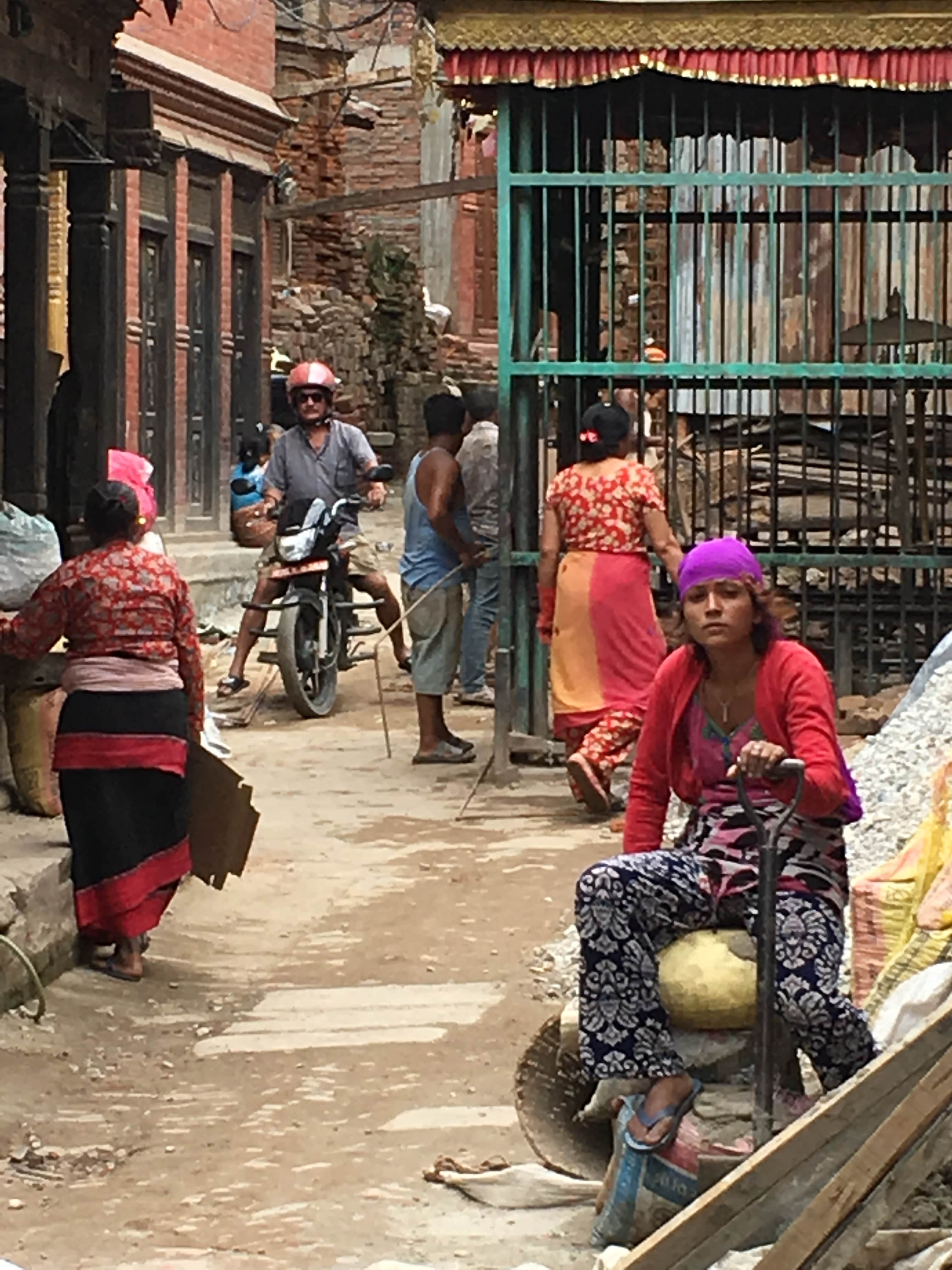 ACP source all raw materials from fair-trade growers and aim to minimise their environmental impact whilst working towards sustainable and economical development. So, here we have found THE WHITE SCARF! We are very happy to be working with organisations who passionately care for and improve the well-being of women. Now we can wear the white scarf with compassion for self and particularly for those women involved in its production from growing for yarn, weaving on the loom, then the hand-stitching by the Seven Women. Wearing the white scarf will nurture women of the east and the west.​ 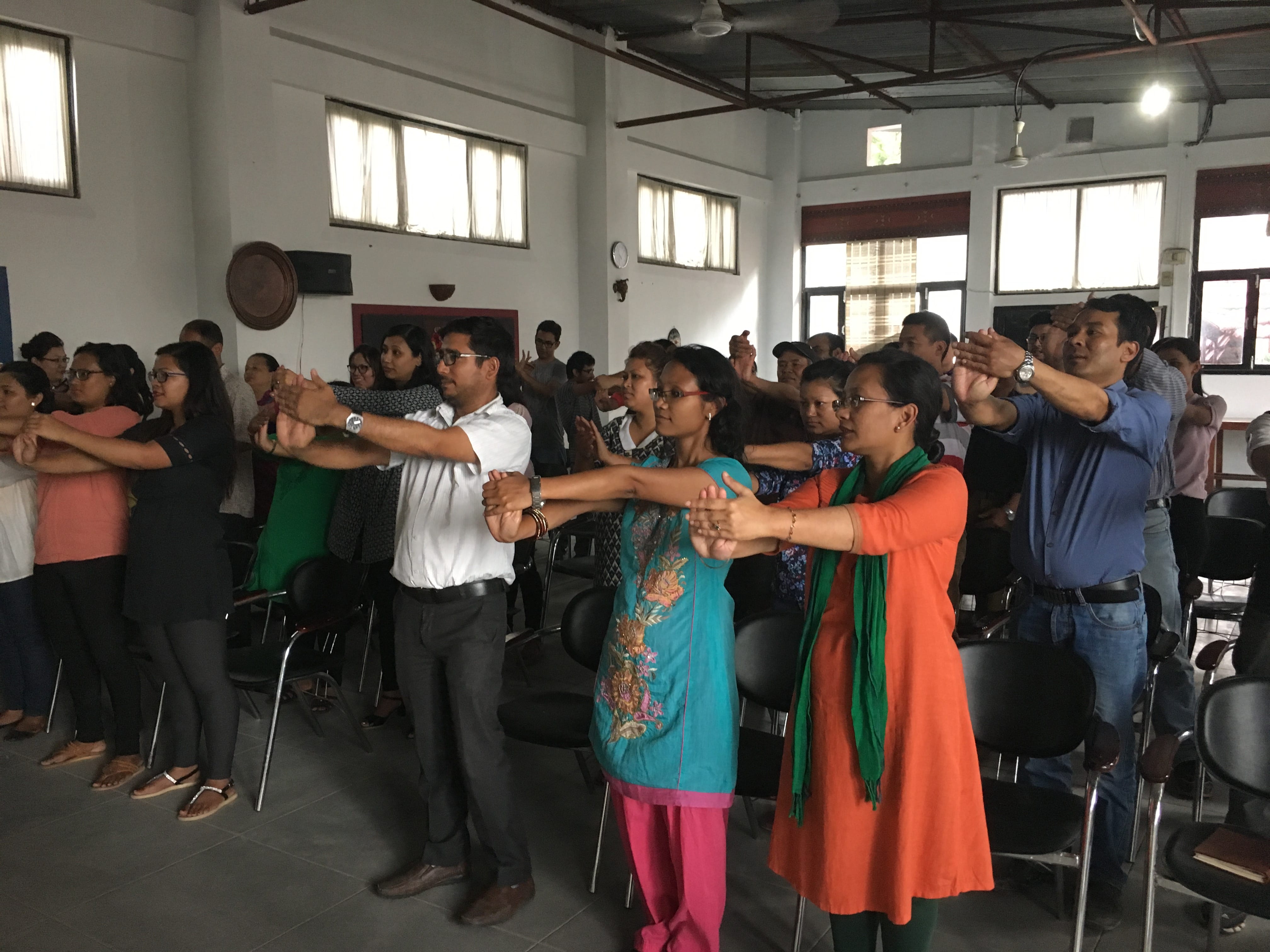