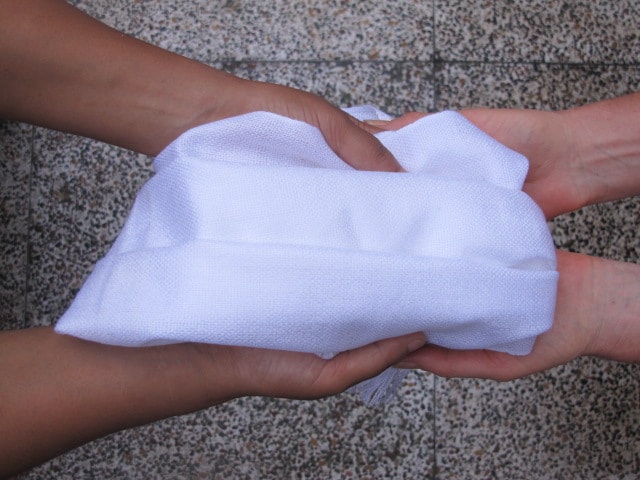 So, we have found THE WHITE SCARF! We started the journey of the scarf with a vision to share compassion, gratitude and kindness across the globe. Our goal for 2017 was to come to Kathmandu to commence this giving and receiving cycle of compassion and kindness. We headed to this part of the world with the hope of sourcing the “white scarf of compassion” from a fair-trade organisation. We’ve always felt connected to this place from our past and we now leave so much more connected for the future. There is a new connection of the heart and spirit with some beautiful and brave Nepali people. Liz and I have come the full circle: 30 years ago we were young girls travelling for adventure, now we are women travelling with a greater vision to share compassion. Our intention is to provide financial support to those living in physical hardship whilst simultaneously cultivating gratitude for the simple things we often take for granted in our more affluent western lives.

We are very happy to be working with organisations who passionately care for and improve the well-being of women. So, we were hugely excited when we found the supplier of the scarf to be the Association of Craft Producers (ACP) Fair Trade (this organisation was discussed in the Day 9 blog). With ACP we will create a continuous chain of women linked in the production of our white scarves of compassion, all employed under the fair-trade act. The yarn will be grown and spun by women by in India. The scarves will be woven on the looms and fringed by the women working for ACP in Kathmandu. And finally the hand-stitching of the border edge of the scarf will be done by the Seven Women workers. They can skilfully use their needles and thread to sew some love and freedom into the final product. We have placed an order for 600 scarves to arrive in Australia by the end of July. Yay!

We see symbolism in this scarf. Our mission is for Connect with Compassion to embed mindfulness in individual’s lives and also within communities for connection of the human spirit. The three rows of stitching on the border of the scarf can represent a gentle mindfulness reminder to it’s wearer; to “Calm the breath, Calm the body, Calm the mind”. The traditional Tibetan white Khata scarf symbolises purity and compassion and is used as a sign of recognition of one’s love or respect for another, and self. This seemed a perfect match of concept and design for us. 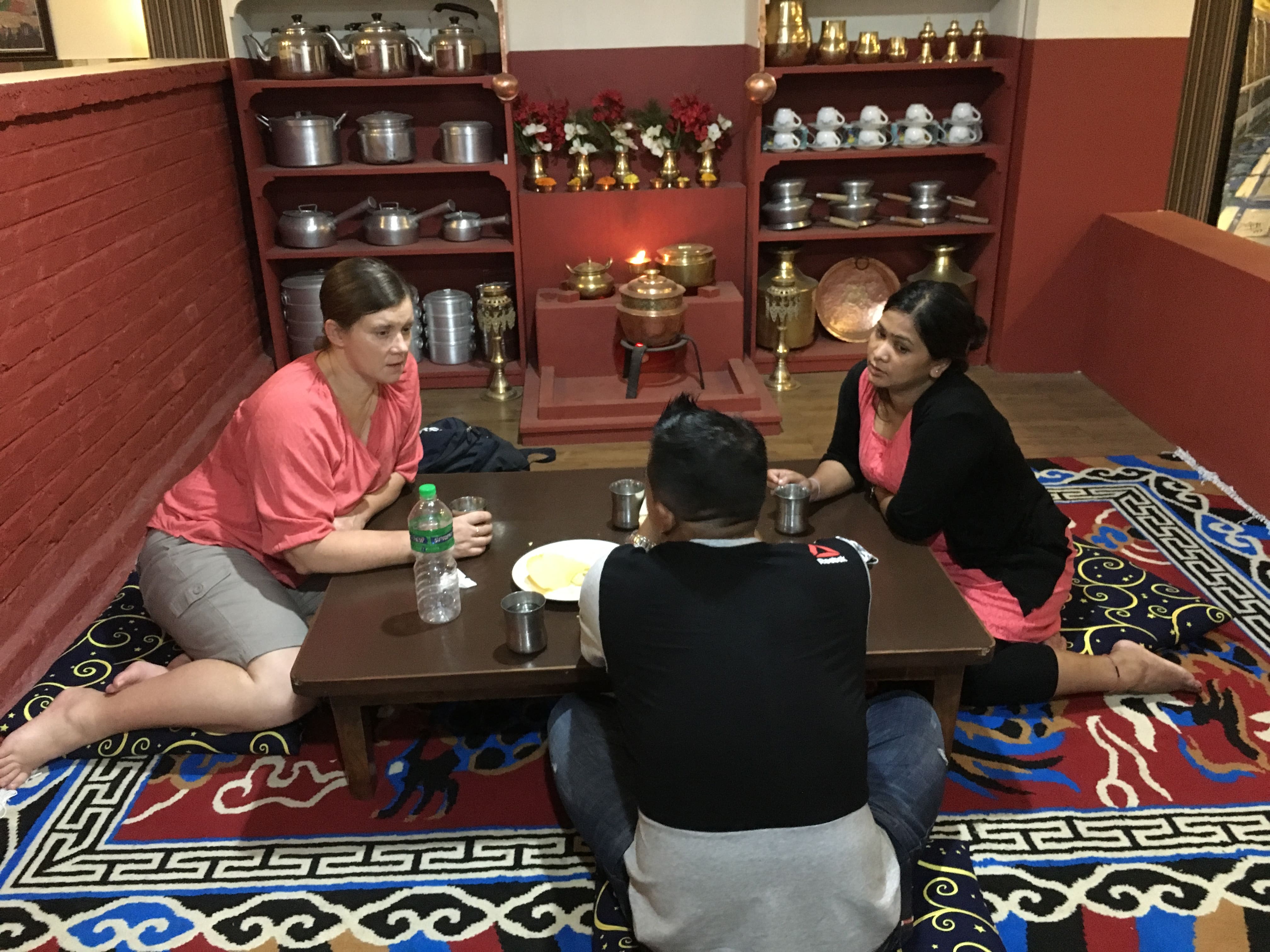 We’ve been inspired by so many stories of brave women in the past ten days. We have met many empowered women who have made change in their lives and in the lives of others, because they believed in something better than what their culture has to offer women. We believe that women are powerful when driven by a passion.

Anita Kerr is the Nepalese director of Seven Women and has a story worth telling. She epitomises the word compassion in “being sensitive to the suffering of self and others with a deep commitment to try to prevent and relieve it”. Nepali women’s lives are better for Anita being in the world. I hope I can do her story justice. She lived in a remote village and was one of seven girls. This is not a good status for a Nepali family, as every family requires a son. Anita sounds like she was a young child with a huge amount of spirit and spunk; which is a trait not greatly appreciated by school-teachers and village people. Nepali girls are raised to be submissive second-rate citizens with few rights. She was entrepreneurial from a young age, pinching plums from trees and selling them to fellow school kids, so that she could buy pencils to practice her writing. As the years progressed, she saw many awful things happen to girls in her village; stories she simply could not share with me. At the age of 14 she decided she would not take the risk of becoming a similar victim of child marriage, sex trafficking or child-labour. So she left her family a note, borrowed a few rupees from her father’s coat pocket and ran. She ran to a town some distance away, and asked a woman in a shop for some work. She was asked what skills she had to offer and she declared she loved to cook! So, she got a job in a kindergarten cooking all the children’s meals on a daily basis. She would start work at 4.30am so that all the meals were prepared in advance. Then she took herself off to school for the rest of the day, and returned to work at the end of the day. By doing this she made it to Grade 10 education. She later worked in the hospitality industry and became the hotel manager. For a female to be in a position of power was a huge testament to her dynamic, hard-working and passionate attitude. She advocated for the rights of the women workers in the hotel, and convinced her boss to sponsor a girls’ education scholarship program, that still continue today. She worked 17 hours a day to earn enough money to put every single one of her six sisters through a college education (Year 11 & 12), and some even went to university. This was not a luxury she afforded herself but she wanted freedom for her sister’s futures. In that time, whilst she was away, she learned that her father had been murdered in their village. The murder was never investigated and whilst they all knew who the perpetrator was, justice has not prevailed. The murder was apparently because her father had loaned a poor man some money, and he still had not repaid the loan many years later. Rather than bearing the irksome burden of his debt for more years, that man chose to murder the kind man who’d loaned the money; Anita’s father.​ 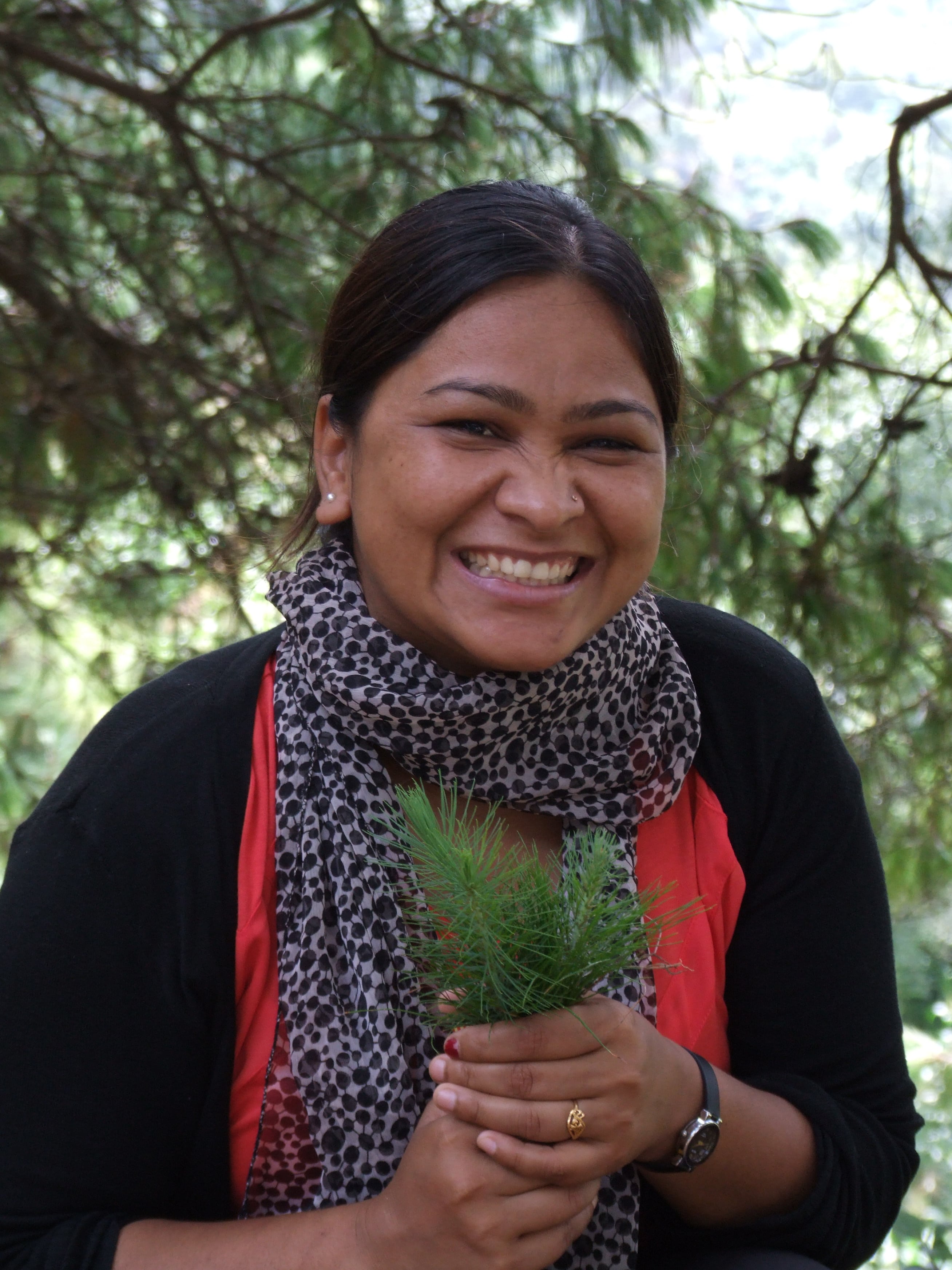 She came to work at Seven Women about seven years ago. She constantly has her eye out for any opportunity that will connect her to people and programs that may improve education, training and independence for women. She spends time in remote villages implementing programs to empower local women. She wants to expand, expand, expand! The new Seven Women cooking school is nearing completion, and will commence in a month or so. But already Anita is dreaming and planning a village-based training centre closer to Kathmandu to run an eco-tourism farm. She is a diamond with strength and brilliance!! In fact she is the Shakti- which means power and love in one. She is only 29 years old. But Anita also knows she will need to self-nurture in order to fulfil her dreams. She understands the impact of stress, and had recently chosen to find a way to manage the busy nature of her mind with the demands of her job. Ironically, she had just commenced using the Get Some Headspace meditation App (this is one I frequently recommend and personally use!) prior to our arrival. Anita will be the very first recipient of the White Scarf of Compassion 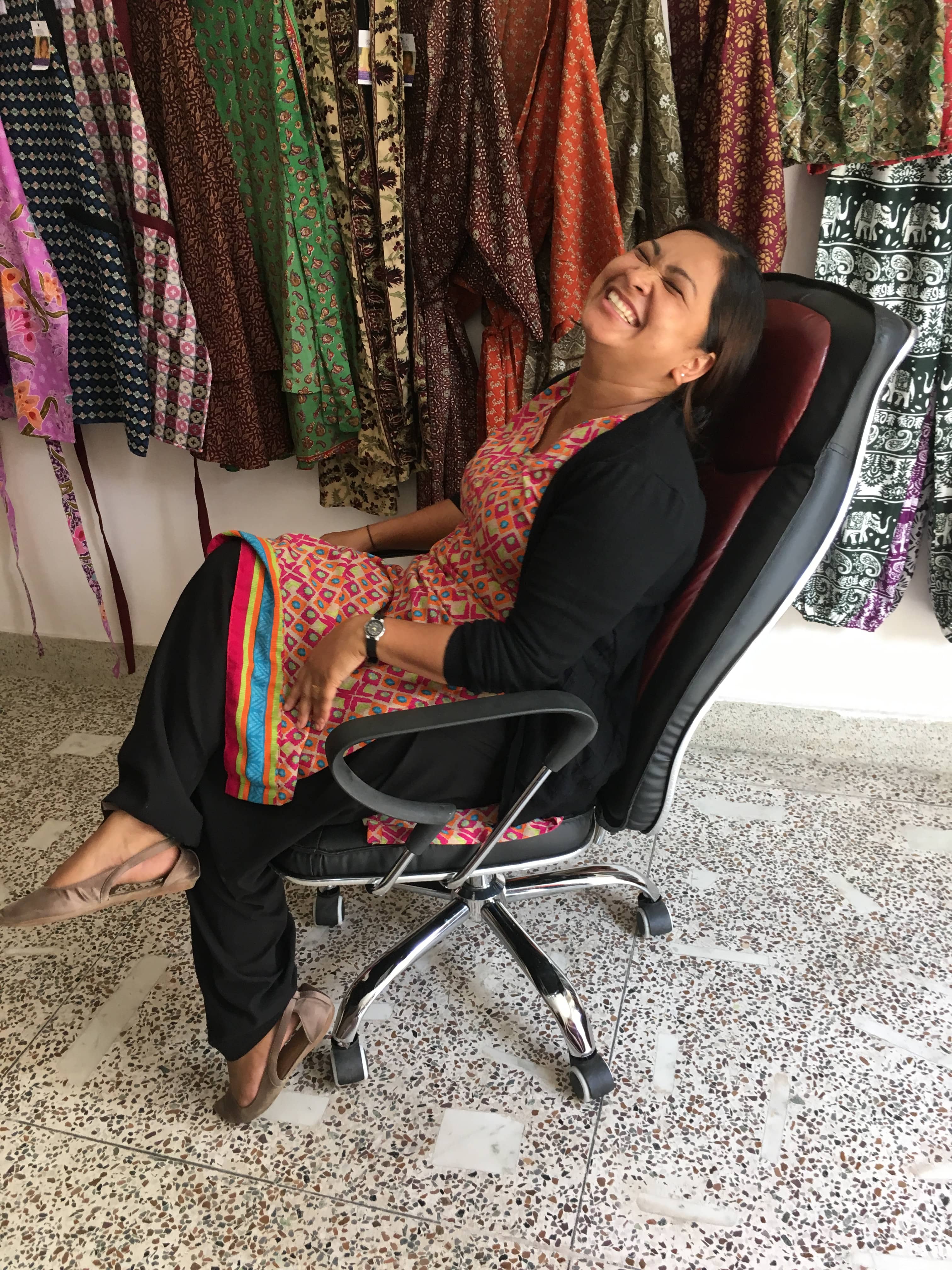 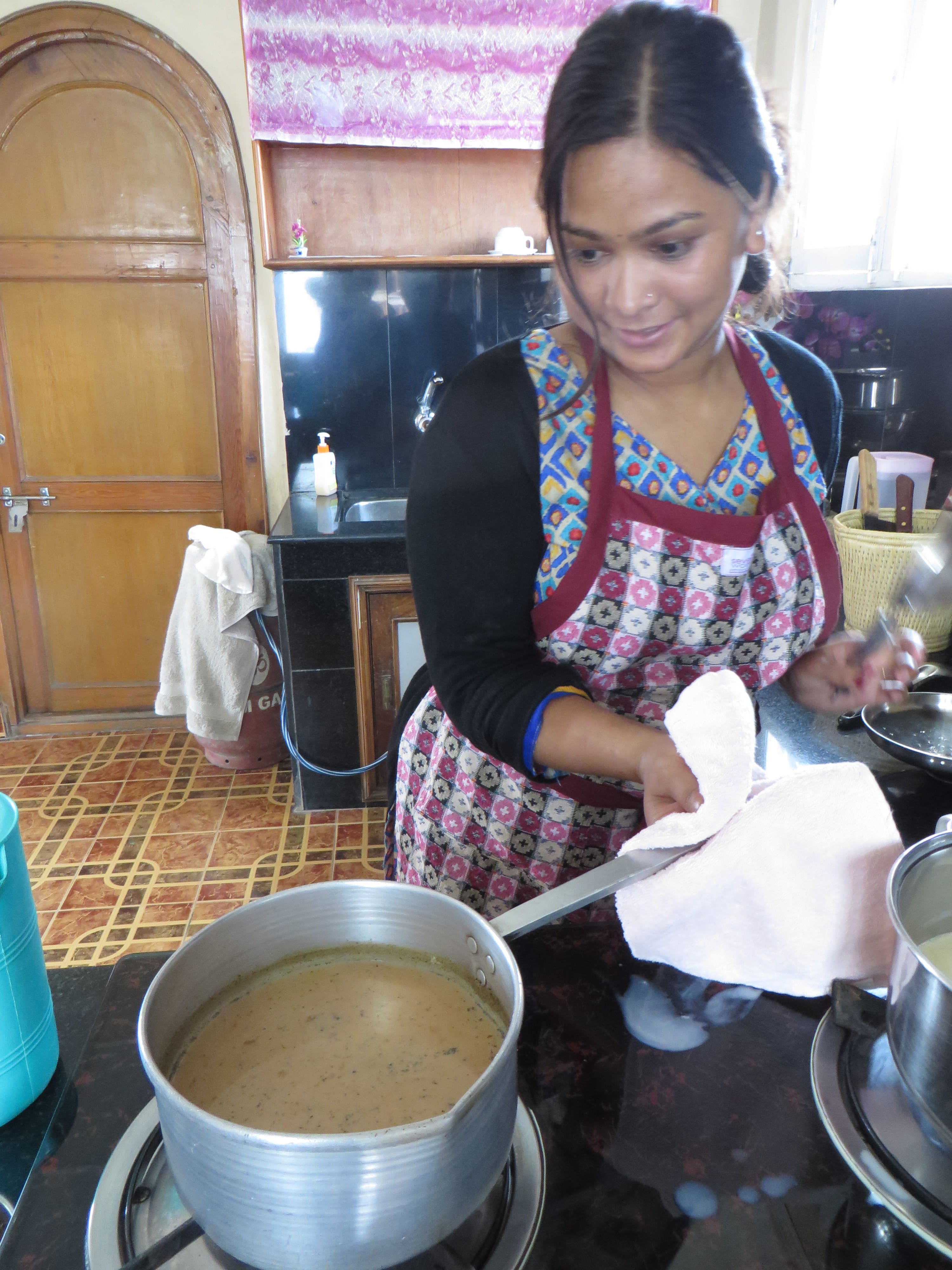 “Having compassion for others frees us from fearing...it turns our attention outward, expanding our perspective, making our own problems...part of something bigger than us that we are all in together.”