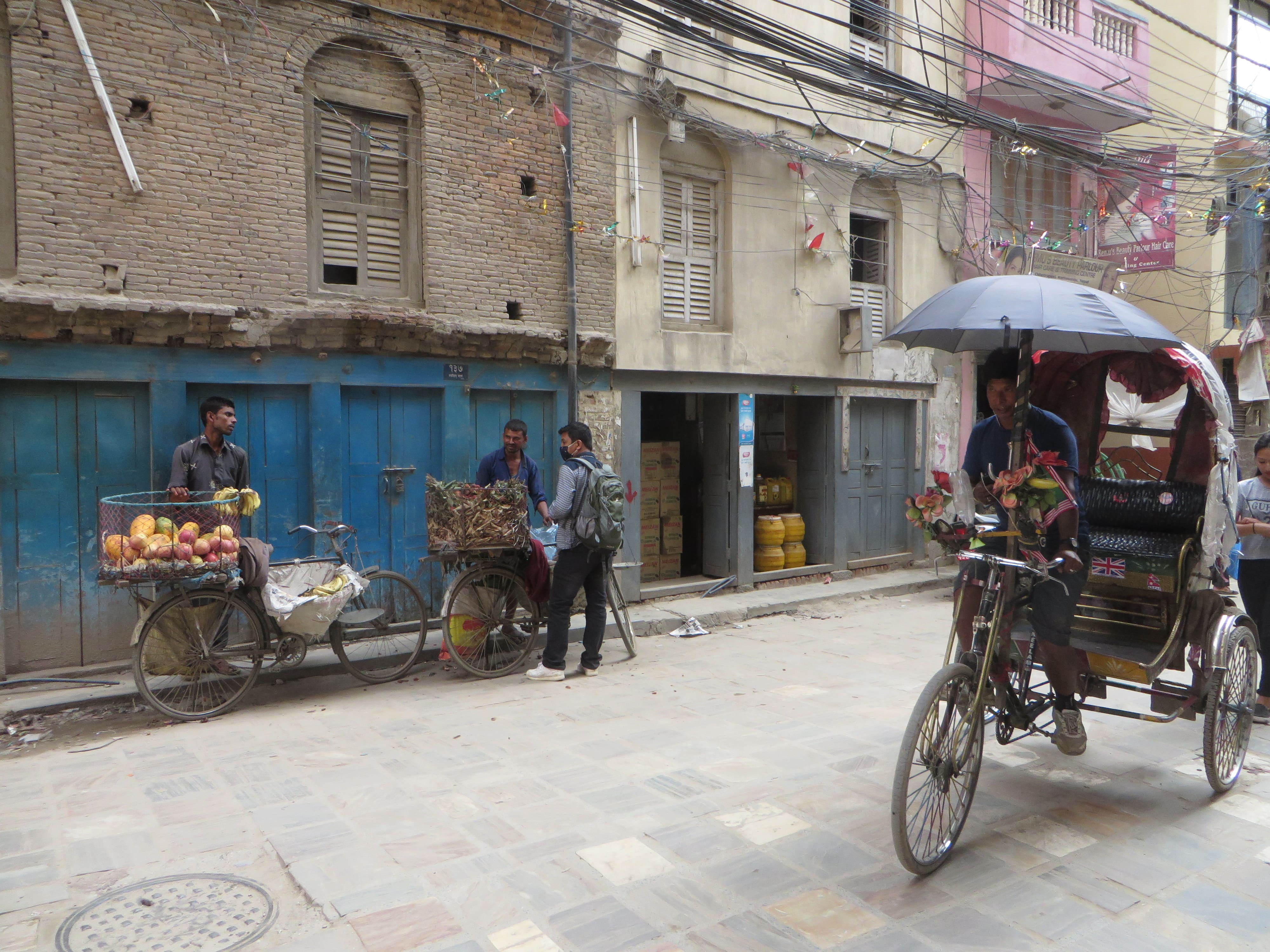 Day 1 - Our Arrival in Kathmandu

Today was one of those days that clarifies what we already know but are often reluctant to accept. …. the wheels of time are turning, things are always changing and nothing stays the same. Actually, the concept that life is impermanent, as the Buddhist philosophy teaches, was to become a real appreciation.

As we flew back into Kathmandu today, 30 years since we last flew out, we were looking eagerly for the Himalayas that had us captivated us so long ago. When we last flew out in 1987 we claimed we would return within 5 years. Not to be! And today only the teeniest sneak view of a majestic mountain was to be spied beneath the thick clouds. That’s ok, the things that don’t change (much) are mountains, whilst the rest of life does. Returning to Kathmandu was to present a challenge to us both. Could we could cope with the changes of time, economics, natural disaster and commercialism in Nepal? The huge filled-in cracks in the road were the first signs of the major suffering that has happened in this country with the earthquake of 2015 that killed 10,000 people in Nepal, and injured 22,000. Such tragedy and change to be endured here in the past 2 years. 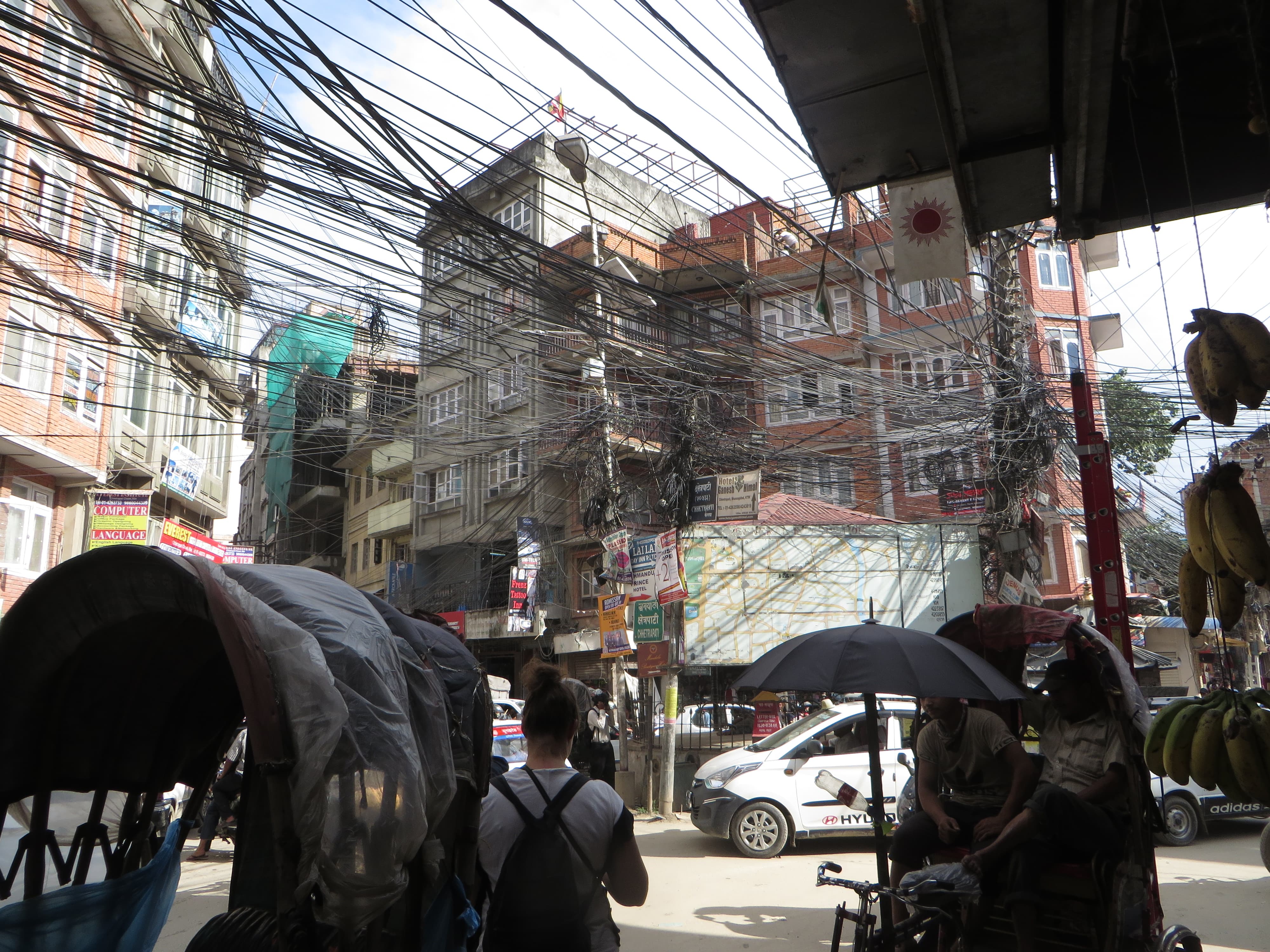 And yet, the essence of the place is the same, as for any part of Nepal. Smiles are everywhere and the respectful greeting of Namaste touched our hearts. We’re back….. and we’re saying Namaste left right and centre! This time I truly appreciate the full meaning of the word Namaste; “I bow to the divine in you”, as we are on the search to notice compassion in all people. We were like first time tourists again, as it’s nice to see things with a new sense of curiousity and a beginners’ mind.​

I thought the cycle rickshaws would be a thing of the past, and was excited to see them still around, but now amidst so many more motorbikes and cars, squeezing us out on the narrow streets. There was some mayhem moments at the narrow roundabouts where the small temples still preside, pride of place, but the cars now jostle and screech for priority. The massive thick spider webs of powerlines nearly hang to the cars. Ornate and aged timber panelling hang precariously off some buildings, and the narrow tall building structures are still made with old red clay bricks. The dusty streets and paved alleyway roads were beckoning us to walk amongst the scattered colourful stalls, the street obstacles, the decorated shops and the people.

When wandering the weaving winding streets in Thamel we came to Mandala Street and were delighted to see beautiful and colourful framed versions of the Compassion Mandala everywhere. It was great to now be able to recognise it after conducting the Mindful Mandala colouring activities before we left. 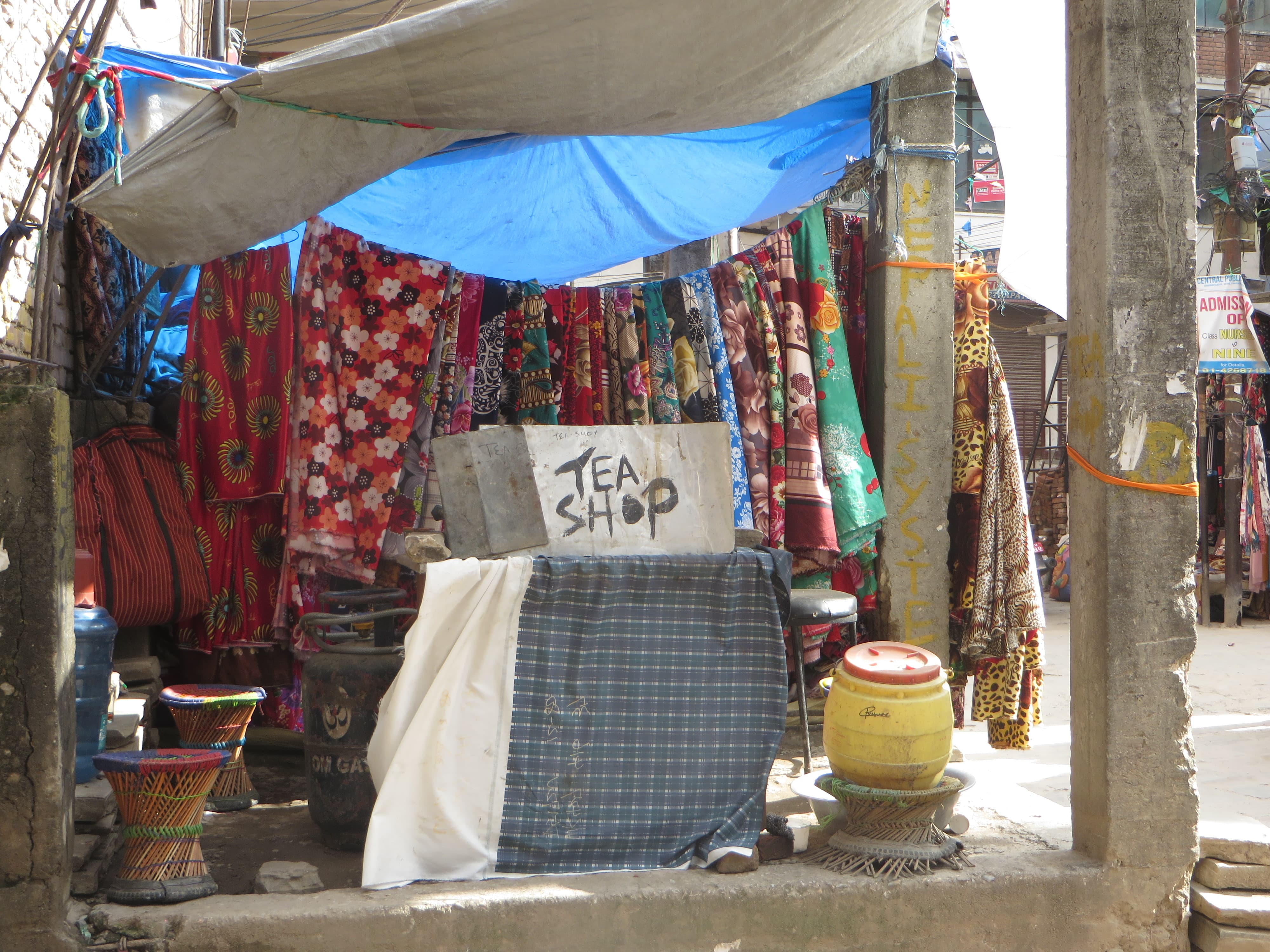 All is busy here but with a pervading sense of calm and slowness. I now realise these eastern traditions have so much to teach us in finding some slowness in busy lives and choosing our way carefully through our moments rather than rushing by and missing things. The simple things I noticed here were the black crows perched on balconies, the potatoes displayed in woven baskets, the fake flowers on the rickshaws, the boy collecting rubbish, the girls in matching saris, the wrinkled faces of the elderly, the policeman hand-directing traffic. Then there was the tea shop with no sign of tea, the beautiful brass singing tibetan bowls in the shops, the prayer wheels built into the main buildings, the red hindu dots on the women faces, the draped saris, and the scarves that are abundant on women and in the small shops. Bring on the scarves!​ 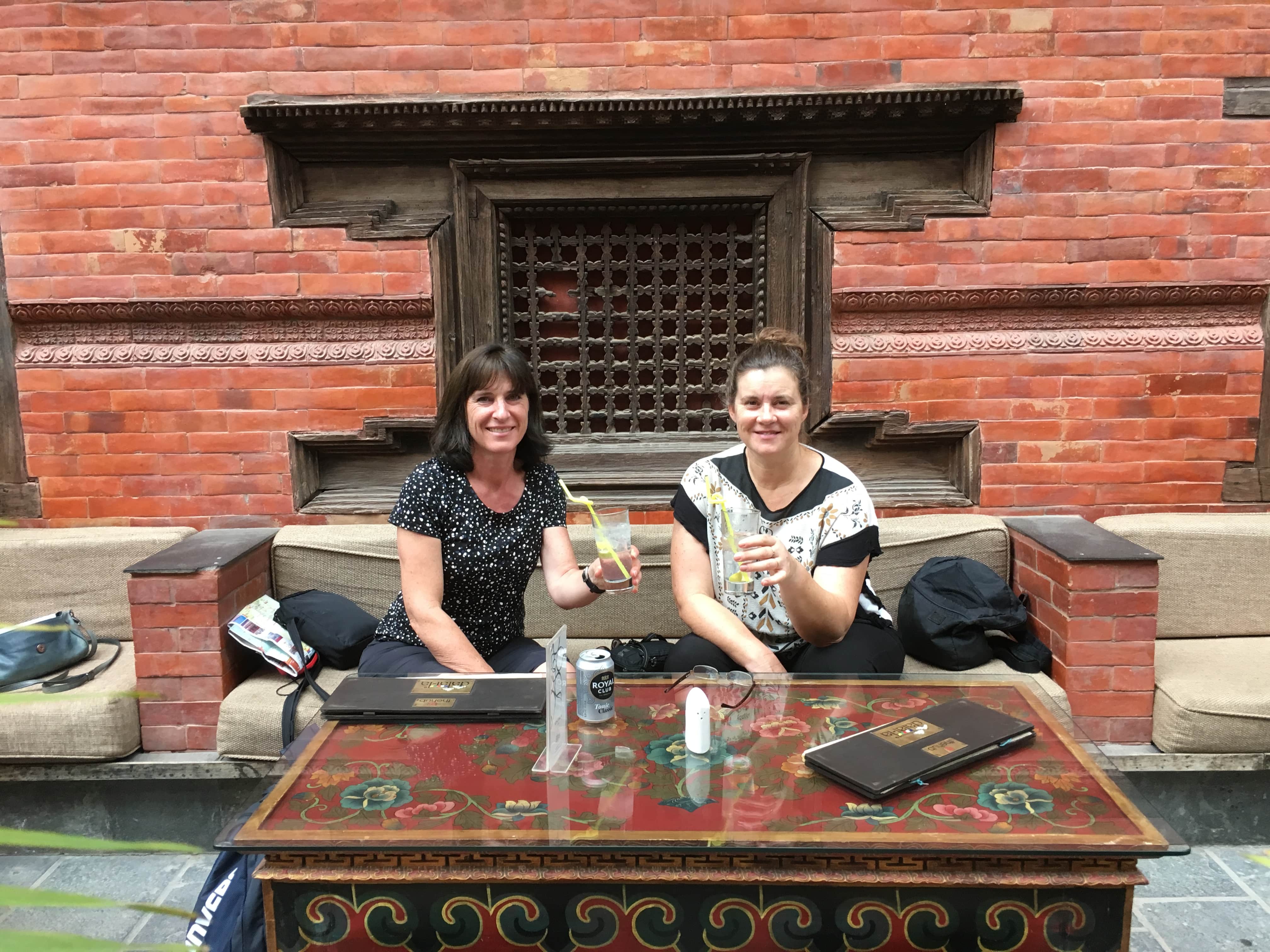 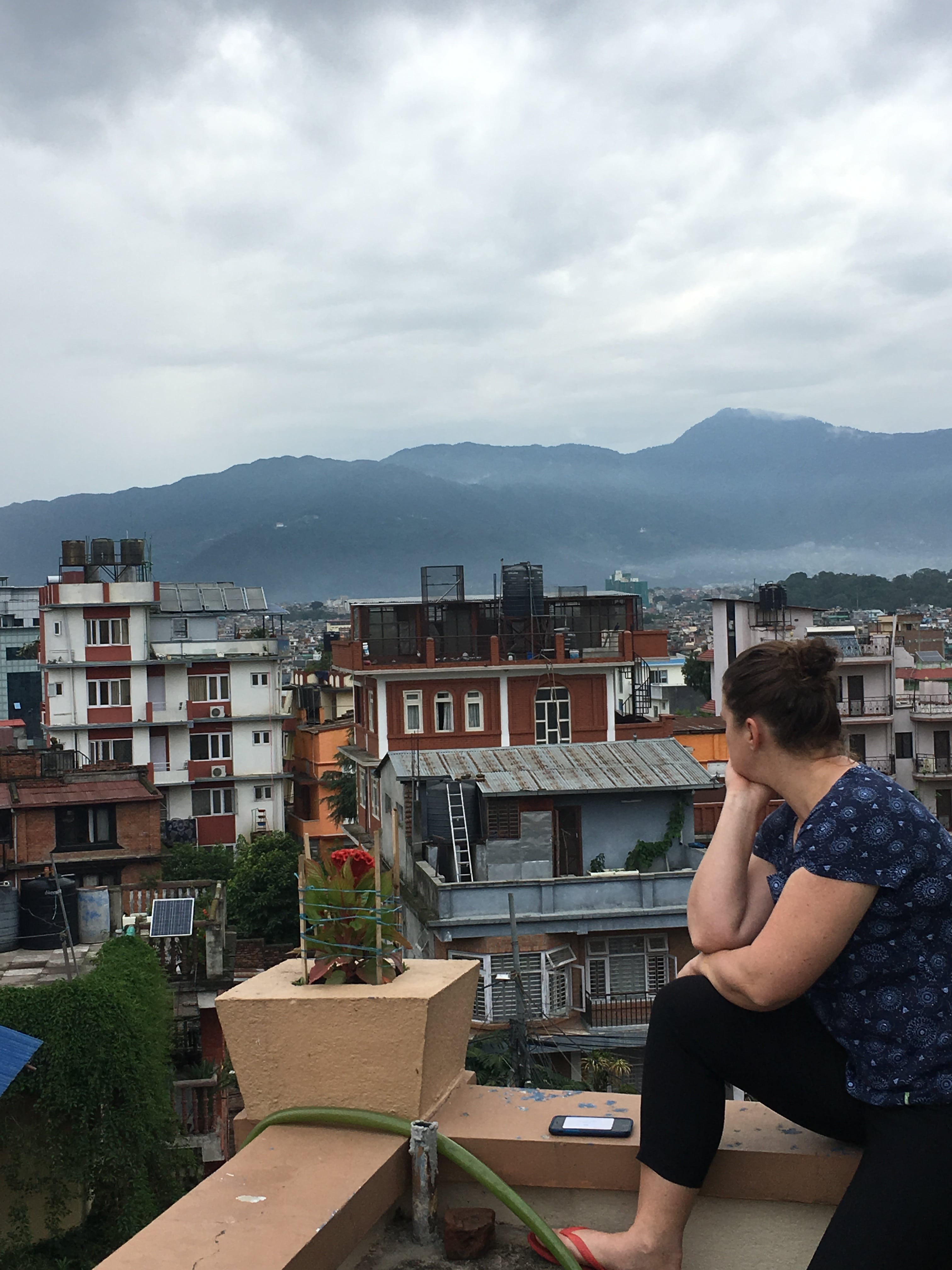